Disclosure: I received a copy of the movie below in exchange for my review. All opinions are my own.

Disclosure: Some of the links in this post are ‘affiliate links.’ This means if you click on the link and purchase the item, I will receive an affiliate commission.

A few years ago if you would have asked me who my favorite Marvel characters was I would have answered with, “I don’t watch Marvel movies.” I know, I know, that is a shame in more than one way, but one of my all time favorites is Captain America it might have been that it was one of my first “press” trips or that I loved the action, we may never know. But I do know now that my favorite Marvel characters include Captain America (DUH), and of course Black Widow/Natasha (Scarlett Johansson). While they are my “favs”, the storylines of all of the previous movies comes together to make one EPIC ending in Avengers Endgame. (Bittersweet right??) My number 1 tip for you is to be sure you watch Avengers Infinity War before you watch Avengers Endgame, or you might be a little confused.

But I think one of my favorite scenes in this movie was the scene that included Cap and Tony (Civil War flashbacks!). While there was lots and lots of action that is the one that played over and over in my head. I do not want to spoil this movie for you, so I’m going to leave you with this. I loved this movie times 3000 and it is packed full of adventure as well as cool scenes that everyone just needs to watch for themselves. Pick up your digital copy now and B\Blu-Ray on August 13, I promise you won’t be disappointed.

Enjoy these fun activities and recipes: 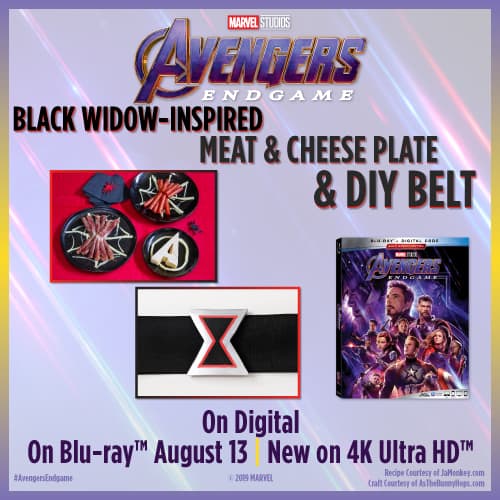 Create a DIY Black Widow belt while munching on a delicious meat and cheese plate! Download them at http://bit.ly/AvengersEndgameActivitiesBlackWidow Now On Digital! On Blu-ray™ August 13 | New on 4K Ultra HD™ 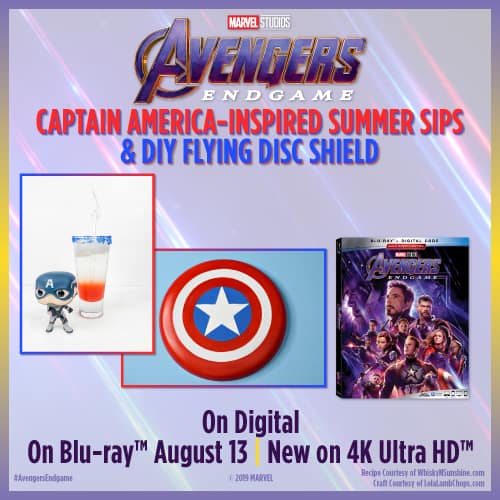 Become the leader you were born to be with these two Captain America-Inspired DIY activities! Create a DIY Flying Disc while having a refreshing Summer Sip! Download them at http://bit.ly/AvengersEndgameActivitiesCaptainAmerica AVENGERS: ENDGAME is On Digital Now! On Blu-ray™ August 13 | New on 4K Ultra HD™ 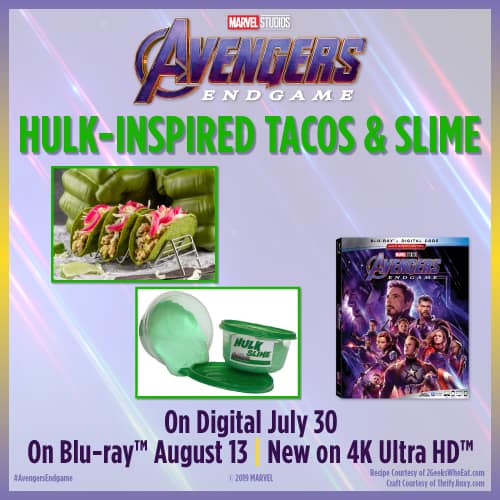 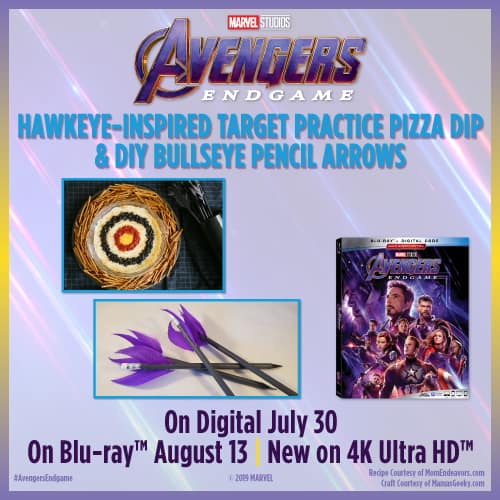 Set your aim on these two awesome Hawkeye-Inspired DIY activities! Create some DIY Bullseye Pencil Arrows while munching on a Target Practice Pizza Dip! Download them at http://bit.ly/AvengersEndgameActivitiesHawkeye AVENGERS: ENDGAME is On Digital July 30! On Blu-ray™ August 13 | New on 4K Ultra HD™ 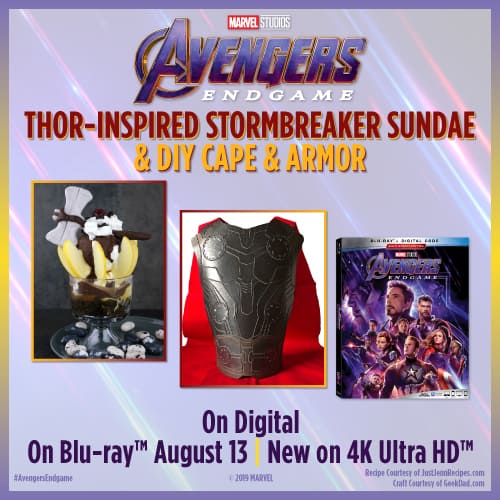 Are you worthy of wielding Mjolnir? You will be with these Thor-Inspired DIY activities! Create a Stormbreaker Sundae and your own cape and armor! Download them at http://bit.ly/AvengersEndgameActivitiesThor AVENGERS: ENDGAME is On Digital Now! On Blu-ray™ August 13 | New on 4K Ultra HD™

Are YOU ready for the ENDGAME?

Marvel Studios’ “Avengers: Endgame,” the climactic conclusion to an unprecedented, 11-year cinematic journey in which the Avengers take one final stand against Thanos, delivered the biggest opening weekend in history and is currently one of the highest-grossing films of all time. On July 30, Avengers fans around the world are invited to assemble once more for the in-home release of “Avengers: Endgame” on Digital in HD, 4K Ultra HD™ and Movies Anywhere, followed by a physical release on 4K Ultra HD, Blu-ray™, DVD and On-Demand beginning Aug. 13.

BURBANK, Calif. (June 26, 2019) — Marvel Studios’ “Avengers: Endgame,” the climactic conclusion to an unprecedented, 11-year cinematic journey in which the Avengers take one final stand against Thanos, delivered the biggest opening weekend in history and is currently one of the highest-grossing films of all time. On July 30, Avengers fans around the world are invited to assemble once more for the in-home release of “Avengers: Endgame” on Digital in HD, 4K Ultra HD™ and Movies Anywhere, followed by a physical release on 4K Ultra HD, Blu-ray™, DVD and On-Demand beginning Aug. 13.

Fans who bring home “Avengers: Endgame” will gain hours of additional screen time with their favorite cast members and filmmakers who have shaped the Marvel Cinematic Universe (MCU). Bonus features include a tribute to the great Stan Lee; the tale of Robert Downey Jr.’s casting as Iron Man; the evolution of Captain America; Black Widow’s dramatic story arc; directors Anthony and Joe Russo’s experience at the helm of both “Avengers: Infinity War” and “Avengers: Endgame”; the making of an epic battle scene with the women of the MCU; the creation of Bro Thor; deleted scenes; a gag reel and more.

The must-own, final chapter of the 22-film MCU series, “Avengers: Endgame,” will be packaged several ways to ensure fans get the most out of their in-home entertainment experience. Viewers can bring home the film two weeks early on Digital 4K Ultra HD, HD and SD and gain access to an exclusive extra highlighting the love story of Steve Rogers (Captain America) and Peggy Carter. A physical copy of “Avengers: Endgame” is available as a 4K Cinematic Universe Edition (4K Ultra HD, Blu-ray, and Digital Code), a Multi-Screen Edition (Blu-ray and Digital Code) and a single DVD. Fans who wish to revisit all four films in the Avengers franchise may opt for a Digital bundle, which includes “Marvel’s The Avengers,” “Avengers: Age of Ultron,” “Avengers: Infinity War” and “Avengers: Endgame.”

BONUS MATERIAL (may vary by retailer):

· Steve and Peggy: One Last Dance – Explore Captain America and Peggy Carter’s bond, forged in moments from previous films that lead to a momentous choice in “Avengers: Endgame.”

· Remembering Stan Lee – Filmmakers and cast honor the great Stan Lee in a fond look back at his MCU movie cameos.

· Black Widow: Whatever It Takes – Follow Black Widow’s journey both within and outside the Avengers, including the challenges she faced and overcame along the way.

· The Russo Brothers: Journey to Endgame – See how Anthony and Joe Russo met the challenge of helming two of the biggest films in cinematic history … back-to-back!

· The Women of the MCU – MCU women share what it was like to join forces for the first time in an epic battle scene — and be part of such a historic ensemble.

· Bro Thor – His appearance has changed but his heroism remains! Go behind the scenes to see how Bro Thor was created.

· Six Deleted Scenes – “Goji Berries,” “Bombs on Board,” “Suckiest Army in the Galaxy,” “You Used to Frickin’ Live Here,” “Tony and Howard” and “Avengers Take a Knee.”

· Gag Reel – Laugh along with the cast in this epic collection of flubs, goofs and gaffes from set.

Marvel Entertainment, LLC, a wholly-owned subsidiary of The Walt Disney Company, is one of the world’s most prominent character-based entertainment companies, built on a proven library of more than 8,000 characters featured in a variety of media over seventy years. Marvel utilizes its character franchises in entertainment, licensing and publishing. For more information visit marvel.com. ©2019MARVEL

For over 90 years, The Walt Disney Studios has been the foundation on which The Walt Disney Company was built. Today, the Studio brings quality movies, music and stage play to consumers throughout the world. Feature films are released under the following banners: Disney, including Walt Disney Animation Studios and Pixar Animation Studios; Disneynature; Marvel Studios; and Lucasfilm. The Disney Music Group encompasses the Walt Disney Records and Hollywood Records labels, as well as Disney Music Publishing. The Disney Theatrical Group produces and licenses live events, including Disney on Broadway, Disney On Ice and Disney Live!.

Previous Post: « Tips for a Luxury Vacation on a Budget
Next Post: Tiny Ones Transport Services T.O.T.S Bringing This Baby Home »