Tangled Before Ever After

Tangled Before Ever After

Now is your chance to feel magic again with Disney Tangled Before Ever After. This has always been one of my favorite movies and now it’s my daughter’s too! Rapunzel is an amazing Disney Princess and she has some awesome adventures. Now you can enjoy this beautiful princess right inside of your home and it’s now available on DVD as of April 11th. Rapunzel is a lovely character and this movie proves it with new adventures I hope you enjoy it as much as we have!

Rapunzel, the Effervescent Barefoot Princess with Magical Blonde Hair,  is Back in An All-New Disney Channel Original Movie!

TANGLED BEFORE EVER AFTER

Synopsis: After all those years stuck in a tower, everyone’s favorite “barefoot princess” (Mandy Moore) yearns to make up for lost time. With the help of her true love Eugene (Zachary Levi), pals Pascal and Maximus and daring new friend Cassandra, Rapunzel postpones her wedding and royal duties to defy danger and boldly explore life beyond Corona’s walls. Sparkling with fun, adventure and music from the legendary Alan Menken, Tangled Before Ever After is a magical movie event!! 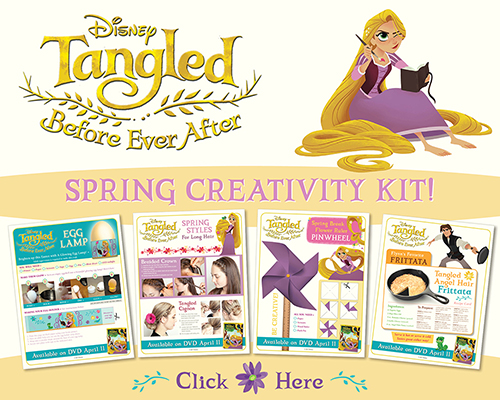 Money saving Mom/Nan (Grandma) of 1, who loves to travel, cook, and of course spend time with family.  Fun. Travel. Food.  Not necessarily in that order. Serving Missouri and beyond!